The FUJIFILM X-Pro1 digital camera not only promises to carve out a distinct position in the premium camera category, but it also promises to reward X-Series loyalists with a camera system that surpasses their expectations.

“Fujifilm puts great emphasis on producing outstanding image quality, and with the X-Pro1, we are proud to offer an interchangeable lens system that performs to the highest professional caliber,” said Go Miyazaki, division president, Imaging and Electronic Imaging Divisions, FUJIFILM North America Corporation. “Each element is the product of Fujfiilm’s commitment to uncompromising quality. With its custom APS-C X-Trans CMOS sensorTM, unique Hybrid Multi Viewfinder and three interchangeable lenses, the X-Pro1 is poised to become the new standard for photographers.”
Setting new standards in image resolution
Fujifilm has developed a new CMOS sensor called the X-Trans CMOSTM. The X-Trans CMOSTM sensor is capable of delivering resolution that is superior to other APS-C sensors and equal to even some full frame sensors.

The new color filter array paves the way for an ideal sensor that does not need an optical low-pass filter. While the optical low-pass filter is indispensable for the reduction of moiré and false color generated by conventional sensors, it also degrades resolution. Fujifilm has developed a new color filter array that is inspired by the random arrangement of fine film grain, removing the need for an optical low-pass filter to solve moiré and false color issues. In the array, RGB pixels are arranged in 6×6 pixel sets with high aperiodicity (randomness). Increasing the degree of randomness eliminates the fundamental cause of moiré and false colors – a problem that occurs in conventional arrays when shooting stripes and other repeating patterns. The presence of an R, G and B pixel in every vertical and horizontal pixel series minimizes the generation of false colors and delivers higher color reproduction.

As a result of using a film-inspired array, a more powerful processor is required to process the image signal data. So Fujifilm has developed the EXR Processor Pro. This technology will maximize the full potential of the X-Trans CMOSTM sensor, delivering high speed and high precision image processing.

Prime FUJINON XF lenses deliver the highest image quality
FUJINON lenses have long been associated with delivering high quality images, with optics used for both broadcast TV and medium format cameras. Now the expertise borne out of this enviable optical heritage has been put into lenses for the FUJIFILM X-Pro1.

Three compact XF FUJINON fast aperture prime lenses will be available at launch. The “XF18mmF2 R” (27mm equivalent) f/2.0, “XF 35mmF1.4 R” (53mm equivalent) f/1.4, and “XF60mmF2.4 R Macro” (90mm equivalent) F/2.4 are all bright and compact and designed to deliver sharp, clear images of uncompromising quality. They offer precise control over depth-of-field and deliver excellent bokeh effects thanks to the design of the molded aperture diaphragm blades. The blades are curved to create a circular image at all aperture settings, while the very edges of each blade are meticulously rounded off rather than simply cut off, which delivers a sharper image. In addition, the solid feel of the high-quality metal barrel and detailed exposure setting in 1/3 step increments using the aperture ring fuel your desire to capture more photos with every shot.

FUJIFILM original “X-Mount” maximizes lens performance
Specifically designed to maximize the mirrorless design of the body the X-Mount has a short flange back distance of just 17.7mm. This means the rear lens elements are as close as possible to the sensor. The wide opening allows the lens to be mounted deeper within the body – up to 7.5mm (approximately) from the mount surface – reducing the back focus distance of each lens to the minimum possible, thus achieving high resolution all the way to the edge of the image

The Electronic Viewfinder provides an excellent “Live View” of your composition. This fusion of technologies allows users to enjoy composing their images through a bright viewfinder, but has the option to overlay vital picture taking information should this be required.

Changing between the two viewfinders is simple, thanks to the switch on the front of the X-Pro1 body. When attaching a FUJINON XF-series lens on the X-Pro1, both the viewfinder magnification and bright frame size automatically switch to support the lens focal length. Viewfinder magnification switches to 0.37x for the 18mm lens, and to 0.60x when the 35mm or 60mm lens is mounted, letting you compose your shot with the bright, crystal clarity of an optical image. The X-Pro1 also gives you the freedom to manually set a focal distance and switch between viewfinder magnifications.

Cutting edge technology in a beautiful camera body
The X-Pro1’s magnesium alloy chassis and improved user interface is a testament to Fujifilm’s unyielding attention to quality and the photographic needs of the professionals. From the exact and deliberate placement of the buttons to the precision milled dials, the X-Pro1 beautifully encompasses all that is needed to deliver high quality photography.
The top and base are made from die-cast aluminum alloy which, combined with high quality touches like precise engraving on the top-plate and hand-enameled lettering on the lenses,
illustrates how the entire X-Pro1 system was designed and built without compromise.

This eye for detail extends to the shutter speed dial and exposure compensation control that is precision milled from solid metal. Details like the shutter speed dial lock mechanism and the recessed exposure compensation dial are designed to prevent accidental movement of settings. The knurled finish on the sides of the dials feature rows of minutely milled squared pyramids for superb grip and confidence.

As a well-known mark of quality, the “Made in Japan” printing confirms that every part of the construction has had to meet Fujifilm’s highest standards.

The lightweight, precision-milled lens hood (included with the lens) has been exclusively designed and machined from aluminum for the FUJINON XF lens. Its compact size delivers superb light shading performance in a design that perfectly matches X-Pro1 styling. Diameters of the aperture ring and focus ring of the three FUJINON XF-series interchangeable lenses are only slightly larger than the barrel for sleek uniformity of design. Precision machined from metal, the reassuring click of the aperture ring at each setting and the comfortable torque resistance when operating the focus ring enhances the shooting experience.

The X-Pro1’s leather-like finish is designed for a quality look and durability. The synthetic leather offers resistance to the elements and high durability, while an original manufacturing process produces a texture with the look and feel of authentic leather. The X-Pro1 has also been designed with the photographer’s comfort in mind. The natural fit of the eyepiece provides excellent shielding from light leakage, and an optional dioptic adjustment lens can also be attached.

Extending Fujifilm’s photo film legacy
In film cameras, capturing multiple exposures is the unique photographic technique of superimposing one image on another by double exposing a single frame of film. Through advanced digital processing the X-Pro1 can simulate this technique by simply selecting the Multiple Exposure mode and taking the first shot. By viewing the image via the Hybrid Multi Viewfinder or on the LCD screen, you can see how the finished multiple exposure will look and then precisely frame the second shot.
Further enhancements have been made to the Film Simulation modes with the new Professional Color Negative Film Modes (Pro Neg. Std and Pro Neg. Hi) designed for X-Pro1 users working in the studio. The X-Pro1 also offers Film Simulation bracketing, along with AE, Dynamic and ISO bracketing; plus the ability to capture the colors and tonal qualities of popular FUJIFILM emulsions through the vibrant colors of Velvia, the softer skin tones of ASTIA and the natural look of PROVIA.

Replicating the effects of monochrome film photography the X-Pro1 lets you use color filters to expand your photographic interpretation. Heighten contrast with the yellow filter and red filter, or brighten greens and deepen reds with the green filter. Just as professional film photographers once selected a filter and printing paper to complement their creative vision, you can easily fine tune image quality with these filters. For those after a more nostalgic theme there is also a sepia filter. 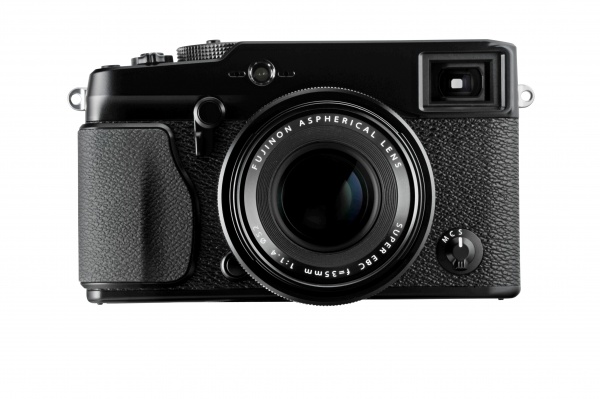 Premium Accessory Lineup
The FinePix X-Pro1 has these additional premium accessory options that are sold separately:

Hand Grip, HG-XPro1 – Giving you more secure and balanced handling of the camera, the X-Pro1 accessory grip smoothly molds to the lines of the camera body for a uniform look. The grip helps balance the weight of the camera body, allowing for a more comfortable hold.

Leather Case LC-XPro1* – Beautifully molded to protect the X-Pro1, this leather case is designed to allow fast access for easy shooting. Attention has been given to every detail, from the color and spacing of the stitches to the use of a hidden magnet rather than a snap for closing the case. The premium case is complete with the authentic leather neck-strap and hood case.
Protector Filter 39mm and Protector Filter 52mm – These protection filters have high transmissivity without affecting the visible light, and the Super EBC coating effectively controls harmful borrowed light. The frame of the filters has a semi gloss black finish, keeping with the high sense of design, while the inner filter ring is finished in a matte black in order to minimize reflections. 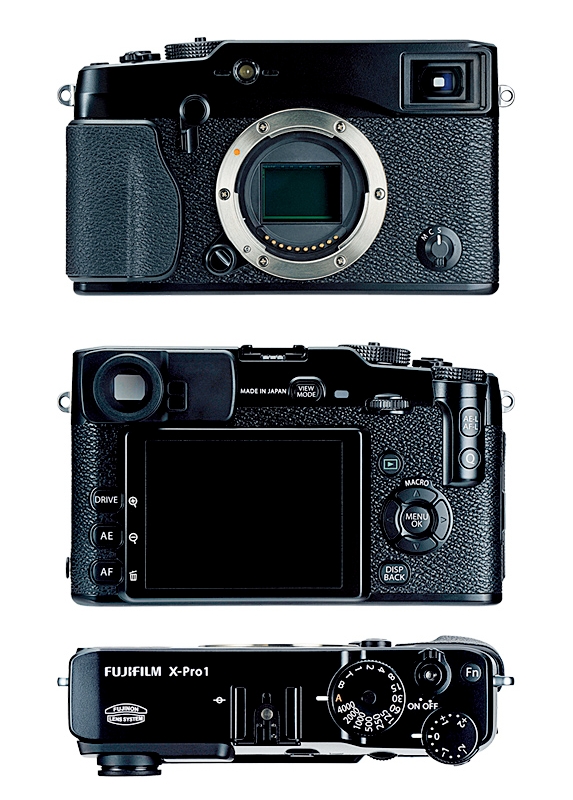 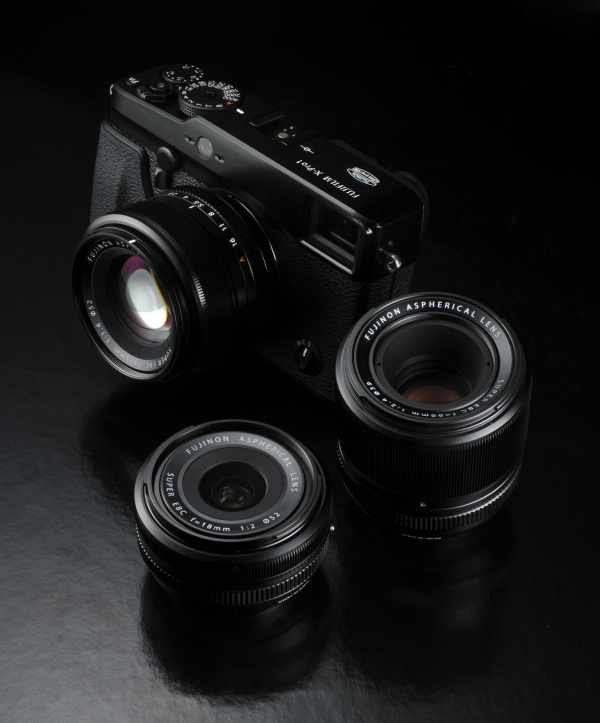 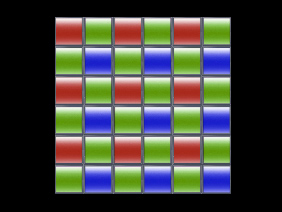 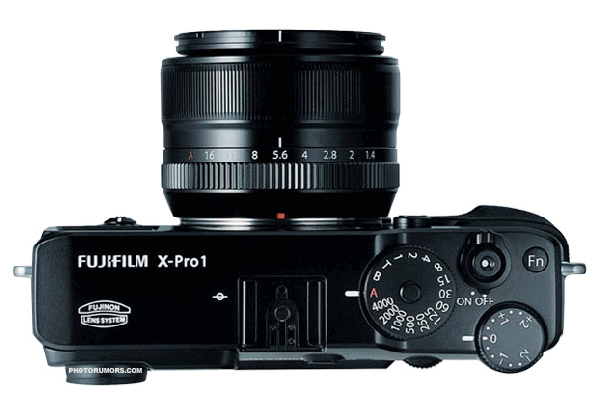 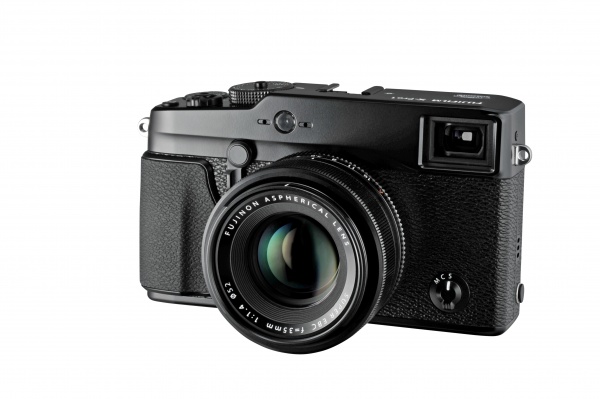